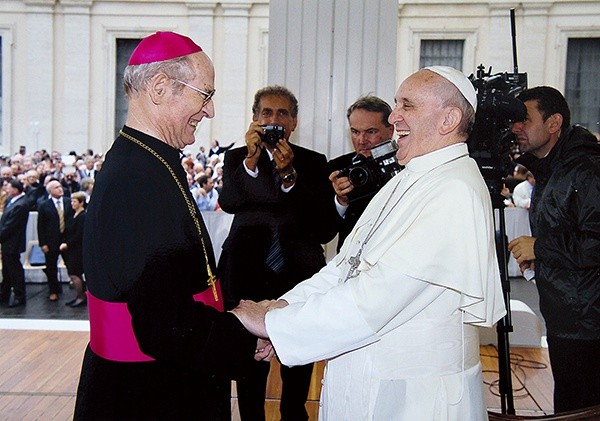 We all can learn a lot from Catholic Archbishop Alfons Nossol of Opole in Poland (1977-2009), who is one of the Champions of Tolerance in the film LOVE IS TOLERANCE.

Alfons Nossol was a good friend of Pope John Paul II. Nossol is an ethnic German, who became the Bishop of Opole in 1977; later
Archbishop. Opole is located in Poland in Upper Silesia, where there
still is a strong German minority after 1945.

Nossol is the great reconciler of former archenemies – the Polish and the Germans.

In 1989, he celebrated the famous ‘Reconciliation Mass’ with German Chancellor Helmut Kohl in Kreisau, Poland, and became his friend.

Archbishop Nossol has been awarded twenty-two decorations for promoting Christianity and reconciliation. A master of peacemaking
and reconciliation, Nossol helped the Polish and the Germans to be at
peace with each other, build unity within the European Union and
NATO – as partners and new friends.

He promotes peace by reconciliation with a thoughtful heart and a loving mind.

In LOVE IS TOLERANCE – TOLERANCE IS LOVE, he speaks in-depth about the Christian way of peacemaking and true Islam:

“The secret of reconciliation is forgiveness. Forgiveness is grace. To start we need dialog. Dialog is the mother language of mankind. Dialog helps to transform enemies into opponents and to convert opponents into friends.”

His view on Islam:

“What happens today with an ideologized Islam, is tragic. But this is no the character of Islam. It is not Islam as such. It is Islam being ideologized. Any ideology is poison. In an ideology only the idea matters, not the person. They want to promote their ideas at any cost, even the cost of human lives.

Ideology is poison. Throughout history, this poison has led so many people to their death.”

“All religions should promote what Reinhold Schneider once said: ‘We have to learn to kill the killing.’ That’s when peacemaking can take place. By fighting, one can only find oeace in the graveyard. True peace can be reached when all of us show truth in love.”