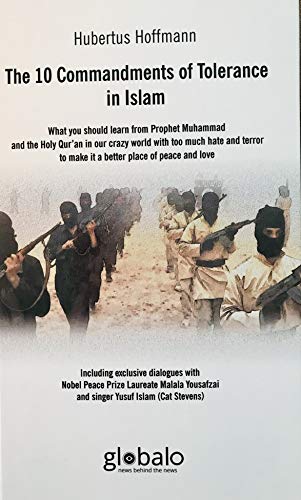 “The 10 Commandments of Tolerance in Islam: What you should learn from Prophet Muhammad and the Holy Qur’an in our crazy world with too much hate and terror to make it a better place of peace and love” is a fascinating and important book by Dr Hubertus Hoffmann, Founder of The Global Tolerance Initiative.

Can Islam be tolerant?

What did the Prophet tell the Muslims?

A first complete book and modern manual of the 10 Commandments of Tolerance in Islam, by Dr. Hubertus Hoffmann, who was decorated by the ruler of Dubai with the first “Muhammad bin Rashid Al Maktoum Tolerance Award” in Dubai Opera February 19, 2020.

You can buy this important work in English as a Kindle e-book on Amazon here for just $ 9.99:

From “The 10 Commandments of Tolerance in Islam”:

“In this book you will find many original sources and pertinent analysis regarding the 10 Commandments of Tolerance in Islam, which show:

Muhammad was the anti-ISIS, anti-al Qaida and anti-Boko-Haram-preacher of his time. The Prophet was not a man of terror, but of salam (peace), din (religion) and hilm (harmony), and a maximum of halim (forbearing) and mercy.

With the help of Islam the Prophet wanted to overcome the bad time of djahiliyyah (period of ignorance) and its negative powers of revenge and violence. The Arabic word djahiliyyah (see Qur’an 3:154; 5:50; 33:33; 48:26) refers to the time of feuds before Muhammad’s preaching began.

ISIL, Boko Haram, and al Qaeda are – unfortunately for them, their victims, and all of us – who might feel as if we are returning back to the dark times of djahiliyyah – negating the true and clear message of the Prophet.

Muhammad was not an aggressive fighter like the radicals nowadays, alternatively he was known as a bringer of peace (salam). Only after his flight from Mecca to Medina, and the subsequent attack of his enemies, was the Prophet forced to turn to self-defense and the sword. In chapter five you will be able to read the rules the Prophet preached for the use of violence on the path of God (jihad) and the so-called “holy war”.

We will examine in detail:

What Muhammad wanted to achieve and how some radicals distort his teaching. How he fostered the relationship between Jews and Christians, and which 27 verses preach tolerance and respect for Jewish and Christian communities. How a Christian king rescued more than 100 of the first Muslims from persecution and became their protector in the year 615. Which 14 agreements regarding tolerance and coexistence the Prophet and his successors concluded with the Christians and Jews, as well as why he guaranteed them freedom of religion.

Also, what about the women in Islam? In Mecca, God led Muhammad to a very special and impressive woman, whose emancipated personality is often forgotten today and stands in stark contrast to the displacement of women from public life by the Taliban, the Wahhabis, the Salafists, and the Muslim Brotherhood. What kind of woman was Khadidjah bint Khuwaylid, Muhammad’s first wife? The rich and emancipated entrepreneur supported her husband and “sponsored” the first Muslims, as we would say today. More about the “mother of Islam” and the rights of women can later be read in chapter 8 titled “Muhammad: ‘I am the Best to Women’.”

Contrary to expectations, the Prophet did not have his enemies killed at the conquest of Mecca in the year 630, but he pardoned them and also did not establish an Islamic theocracy. You can read in chapter 6 “The conquest of Mecca – the prime example of reconciliation and separation of state and religion.” The reader will learn why mercy is the most important guideline of a true Muslim and why it dominates the Qur’an (4.5).

We will analyze the Golden Age of Islam in the ninth century, when Islam was perceived as the number one world power (like the United States today), because it was open-minded, hungry for knowledge and tolerant towards Christians and Jews.

The Ten Commandments of Tolerance in Islam will be contrasted with the preaching of hatred by a radical minority , and the Champions of Tolerance are also presented.

An Islamic Renaissance of Enlightenment – and not a modern reform – is urgently needed today. It should revive the ancient and true teachings of Muhammad on the subjects of grace, respect, dignity and mercy, and thus curb the powers of mercilessness and murder.

Promoting tolerance means to go back to the roots of the truly merciful God as a point of reference for faithful Muslims. This implies embracing liberation from hatred, which is hostile to human beings and self-destructive. The schism between Sunnis and Shiites is also in need of this healing through the mercy of God. A true Muslim denies the negative powers of jahiliyyah and promotes, like the Prophet, a world of salam and a society of din and hilm.

In the Islamic world, far too many politicians and influential citizens have forgotten the true statements of the Qur’an and the deeds of the Prophet. Power politics, power plays, and struggles prevail. Who defends the true, peaceful Prophet? Who dares to stand up against the few vociferous radicals who abuse the Qur’an and turn it into the opposite of what it stands for; and simply ignore its admonitions for tolerance, respect, restraint, and God’s mercy? Is this merely indolence or bourgeois cowardice?

Far too few Muslims protect the lasting impressions and requests of the Prophet against the blasphemy of terrorists. It is not the few radicals who are the problem, but the passivity of the politicians, the elites and the masses.

The thundering silence in the Muslim world is the main enemy of tolerance and a silent accomplice of evil. More than 90 percent leave the few radicals too much room, so they are easily able to turn the teachings of the Prophet upside down. Everyones needs to obtain an active vision concerning the roots of tolerance in Islam, as well as a steady promotion to contain the elements of evil.”